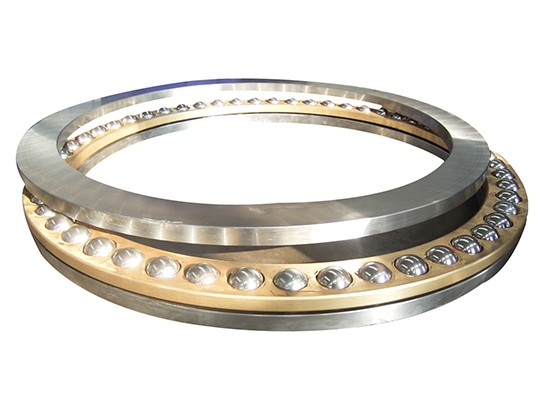 The use of thrust ball bearings: It is only suitable for parts that bear an axial load on one side and have a low speed, such as crane hooks, vertical water pumps, vertical centrifuges, jacks, low-speed reducers, etc. The shaft washer, seat washer and rolling element of the bearing are separated and can be assembled and disassembled separately.

There are two key points in the assembly of thrust ball bearings. One is the control of the pressing quality of the cage and the steel ball, and the other is the control of the nominal height T after the bearing is assembled. In addition, since the shaft ring and the seat ring can be separated, it brings a management problem.

It is to prevent the mixing of imported bearing parts. The M-type stamping cage uses a flanged assembly die. After pressing, the steel ball is required to rotate flexibly in the pocket, but it cannot fall off from the pocket, and the technical regulations check the amount of movement of the steel ball in the pocket. If the solid cage is imprinted too deeply, the movement of the steel ball will be small, and the connection between the embossed convex part and the cage is too small and the strength is insufficient, which is prone to the phenomenon of falling blocks, causing the cage to be scrapped.

This requires certain measures. Usually, the drawing ring and the seat group are distinguished by auxiliary tooling when the sleeve is assembled, or the inner diameter size is checked with an inner diameter plug gauge before sampling the nominal height.

For the convenience of checking the inner diameter, put the seat ring on the bottom and the shaft ring on the top. If the inner diameter of the seat ring has obvious quenching heating oxidation color or has not been ground, it is not necessary to check the inner diameter size, and the difference between the shaft washer and the seat ring can be clearly seen, and it is not easy to mix. After the thrust ball bearing is assembled, the nominal height T needs to be measured to confirm whether it is qualified. When measuring, calibrate with a height block or standard part, and measure the load, the bearing needs to be rotated dozens of times, and the minimum height must be reached.

When the thrust ball bearing operates at high speed, the contact angle between the steel ball and the radial plane of the raceway will be affected by centrifugal force, which will cause the sliding of the steel ball relative to the raceway. Adhesive wear from this sliding can damage the bearing. To prevent this damage, the minimum load on the thrust ball bearing must be guaranteed, see Equation 1 or Equation 2, whichever is the larger of the calculated values.

Thrust ball bearings are separable bearings with a contact angle of 90°, which can only bear axial loads and have a low limit speed.

(2) Two-way thrust ball bearing type 52000 This type of bearing can withstand axial loads in two directions, and can limit the axial movement of the shaft and the housing in two directions.

During the operation of the thrust ball bearing, if the external axial load is too small, the bearing is not compressed. Due to the action of inertial force, the steel ball will slip and destroy the normal operation of the bearing. Therefore, a certain axis must be applied to the bearing. To load, the minimum value is calculated as follows: Famin=A(n/1000)2

The minimum load constant, A, is listed in the bearing dimension table. If the external axial load is too small, the bearing can be preloaded with a spring.

To ensure verticality, the two bearing surfaces of the thrust ball bearing must be parallel, and no deviation is allowed. If the shaft centerline and the bearing surface of the housing cannot be guaranteed, spherical seat rings and self-aligning washers can be used to compensate.

Thrust ball bearing can only bear axial load, and its axial equivalent dynamic load is: Pa=Fa

The axial equivalent static load of the thrust ball bearing is: Poa=Fa

The clearance and preload of the bearing can be adjusted by grinding the thickness of the spacer, and the contact angle of the bearing is 60°. The nominal outer diameter of this kind of bearing is the same as that of the matching double row cylindrical roller bearing with the same bore diameter, but the outer diameter tolerance zone is below the zero line, and there is a gap between it and the shell, so it does not bear radial load. Specially used for thrust bearings.

In order to facilitate effective lubrication, a lubricating oil groove is provided on the bearing seat ring, and a lubricating hole is opened in the middle.

For the spacer sleeve between the two shaft rings of the bidirectional angular contact thrust ball bearing, a gap can be formed by grinding the thickness of the spacer sleeve 1, so as to ensure that the bearing will obtain a suitable axial preload after installation. The preload should not be too large so as not to twist the gap sleeve and cause a larger preload.

The BEM ball screw bearing is a one-way angular contact thrust ball bearing with a contact angle of 60°, which can bear a large axial load in a single direction, and can also bear a certain radial load. Usually, the bearings need to be used in groups, and the configuration is the same as that of angular contact ball bearings. See “Bearing dimension table” for preload value, not marked in the code.

The bearing set is composed of bearings with matching outer and inner diameters, and the representation method is shown in “Code of Angular Contact Thrust Ball Bearings for Ball Screws”.

Angular contact thrust ball bearings for ball screws: The requirements of the ball screw on the bearing are the same as those of the main shaft and the transmission shaft, that is, sufficient accuracy and speed should be guaranteed, the difference is that the screw bearing bears The load is mainly axial. Therefore, the axial accuracy and rigidity of the screw bearing are required to be high. The feed system requires flexible movement and sensitive response to small displacements (small rotation angles of the lead screw). Therefore, the friction torque of the bearing should be as low as possible.

At present, the most used ball screw bearings are angular contact thrust ball bearings with a contact angle of 60°, followed by needle roller and thrust roller combined bearings. The latter are mostly used in large and heavy machine tools that require high rigidity.

Angular Contact Thrust Ball Bearings for Ball Screws These bearings are lubricated with grease, and the amount of grease filling is shown in the “Bearing Dimensions Table”. For operation refer to the practice of angular contact ball bearings.

Angular Contact Thrust Ball Bearings for Ball Screws are greased with allowable rotational speeds as shown in the sample bearing dimension table, and are suitable for back-to-back or face-to-face arrangements. As for other bearing arrangements, the limit speed will be reduced.