The original Forza Horizon game was released in October 2012, so it is approaching its 10th anniversary. To mark the anniversary, Microsoft is rolling out a Horizon 10-Year Anniversary Update for Forza Horizon 5 on Xbox and PC that comes with a new “Horizon Origin Story” and Midnight Battle Mode that lets players win races. Let’s collect rare cars.

The free Anniversary Update launches on October 11th, beginning a four-week celebration. And for anyone who’s getting into the Forza Horizon series, Forza Horizon 4 and Forza Horizon 5 are well-tagged on the Microsoft Store and Steam right now. Note, these games are also available on Game Pass.

The Horizon Origins event is a new narrative experience that spans five chapters and takes players back in time to re-live “iconic gameplay moments” from the entire series. Players who complete all five chapters will receive the 2013 Dodge SRT Viper GTS Anniversary Edition. This is a special edition of the original Forza Horizon cover car.

Midnight Battle Mode, meanwhile, challenges players to win street scene races that pop up – there are a total of 16 of these in the game. Players can unlock four rare cars in Midnight Battle, including a 1971 Ford Mustang Mach 1, 1984 Honda Civic CRX Mugen, 2003 Toyota Celica SS-i, and 2010 Lamborghini Murciélago LP 670-4 SV.

Additionally, Forza Horizon 5’s in-game music has been updated with a new permanent station that includes songs from the entire series. Players will unlock new songs by completing Accolades in the Horizon origin story. The full list of tracks is available on the Forza Horizon website.

Additionally, players can unlock new items, emotions, and car horns themed around the Forza Horizon series, including T-shirts for the game’s previous locations such as Australia and Colorado. What’s more, the world of Forza Horizon 5 is evolving to celebrate the anniversary, with new festival sites in the game world themed around previous entries in the franchise.

Eight new achievements for Forza Horizon 5 are also being added with the anniversary update to help players grow their gamerscore even more. 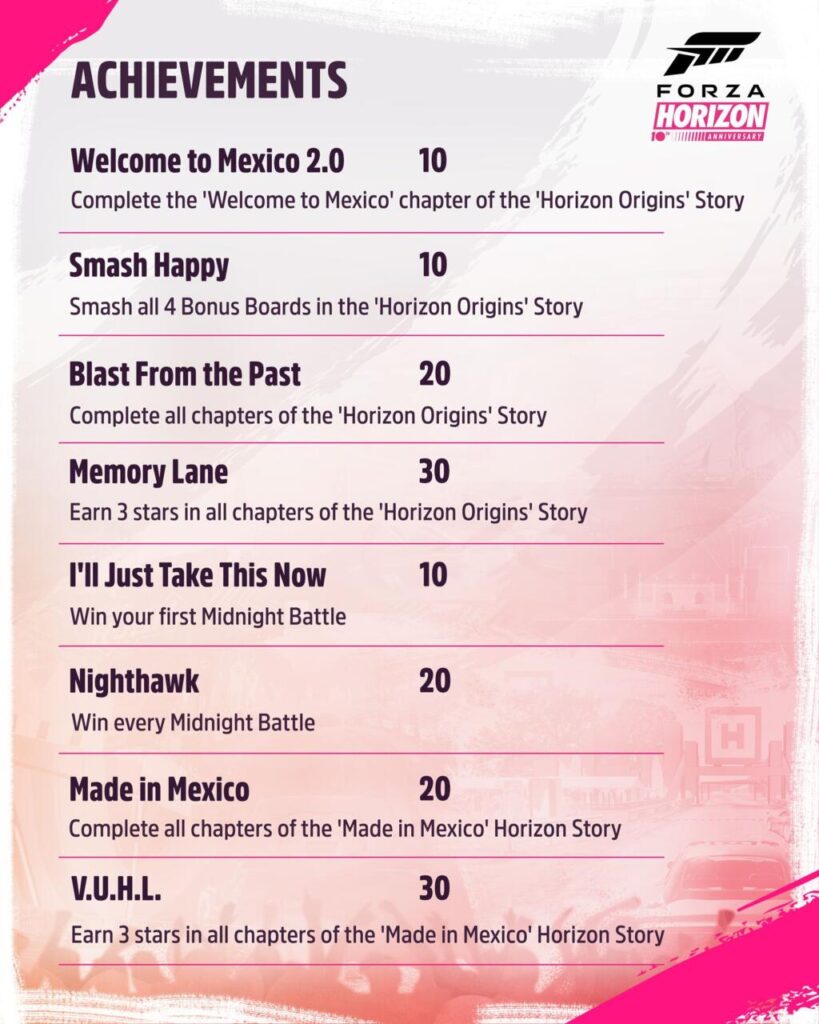 Finally, Microsoft teased the next update coming for Forza Horizon 5, saying only that it would include “doughnuts.”

“For now that’s all we’re saying — whether it’s the savory or the runny kind, you’ll have to tune back next month for official details!”

In addition to an ongoing update for Forza Horizon 5 and possibly the next entry in the series, developer Playground Games is making a new fable game, though little is known about it. Outside of the Forza Horizon series, Microsoft’s Turn 10 studio is building a new Forza Motorsport game for release in Spring 2023.